Part Two of an interview with Chisayo Lewis

- November 01, 2011
Jan.s:   Chisayo, in our last interview you mentioned the influence both your grandmother and mother had on you with your sewing...can you tell us more...

Chisayo: Janice, I don't know where to start...Let's try to remember my grand mother first ....My grand mother was born in 1912 in a wealthy Bushi (Samurai) family. My grand mother talked a lots of stories about her childhood but I thought they were all made up stories because many of them were so unreal in many ways such as Monsters,Ghost and trick animals... . 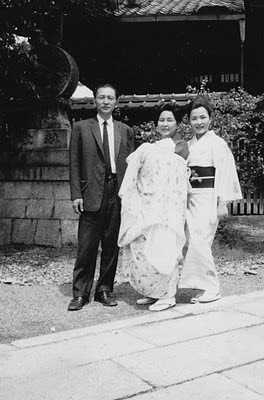 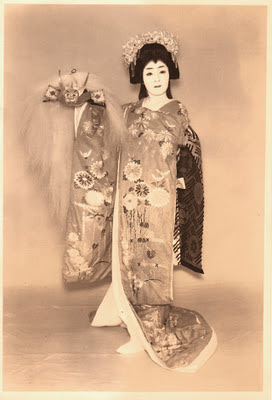 Her family adopted a few  Sumo wrestlers. It was a big mistake of their family... They lost all their money at the end.


My grand mother  and grand father were arranged married. They both married before and had a child each. My grand father was born in a rich Shoya (Village headman) family in Nara. He was well educated  and good at various sports. Especially He lover the horse ridding.


After the WW2 my grandfather had a job as a calligrapher at one of famous Japanese "Ryo-tei (restaurant)" in Kyoto but pay wasn't enough to feed the family. My grand mother started sewing kimonos for support her family.

Many people started to wear Western style dress in 1950's  but still a lot of kimonos need to be made so my grand mother was working 365days a year but it wasn't a good money job.


She was a very hard working woman.  Every time I went to see my grand mother I sat next her and watched how she makes kimono. It was amazing to see. My grand mother often gave me a tiny  scraps and taught me how to make bean bags, different kind of pouches and little kimono for my doll. She taught me Origami as well. I  loved to make things with her.


My grand mother was very happy about I started learning kimono dress making.She made a beautiful special kimono for my Coming of age celebrations. She was pretty sick then but she said she wanted to make and she enjoyed to make it. This is the last photo with my grand mother. 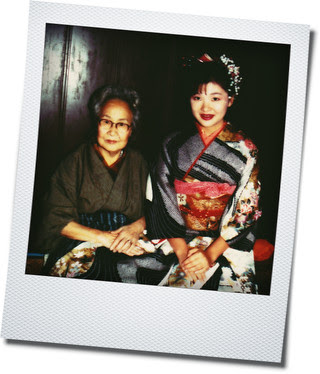 All photos courtesy of and copyright (c) 2011 Chisayo Lewis