The year Jo turned fifty, she sold her house to finance her lifelong dream of exploring the sacred sites of Egypt, the Mayan jungles in Mexico and the Native American reservations in Arizona where she was invited to participate in ancient traditional ceremonies. After reading an article Jo wrote about her adventures, a travel agency in Queensland offered her the job of escorting groups from Australia to explore the world’s most sacred sites – a brand new career destined to last another seventeen years.

Janice: Jo, we've known each other for many moons now. From that first random meeting I experienced your  nature as all accepting and embracing. Were there particular role models who embodied these qualities?

Jo:  My first role models would have been my parents. Back in the 1940s when I was a child, they ran what we call these days, a ‘soup kitchen’ at the South Melbourne Presbyterian mission. Not only did they supply food, Mum made lots of clothes for the homeless children and Dad wrote endless letters to people begging for help. Every now and then they brought a homeless child or teenager home to stay with us for a weekend.  Later role models would be my dear friend now deceased, Aboriginal elder Burnum Burnum and  Margaret Deveson who did so much for raising awareness of mental illness.

I first met Burnum in Avalon where I had a New Age shop and meditation centre. I asked him if he would be interested in conducting a workshop at the place where I lived in Whale Beach. He ended up doing quite a few workshops educating us in traditional Aboriginal practices. We were about to conduct a workshop travelling together to  Melbourne, the Gold Coast and Brisbane when he became ill and eventually died. I love that he went to England and planted the Aboriginal flag on the cliffs of Dover, claiming England for the Aborigines and removing the remains of an Aboriginal woman Truganini from a Tasmanian museum. He was an amazing man. 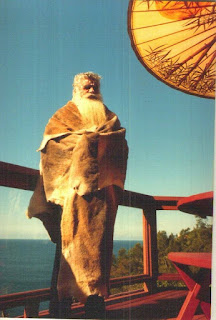 Janice, Jo, at such a young age, how  did you respond to having other young people enter your environment?’

Jo: I loved it but I always felt so sorry for them. I’ll never forget the time a young teenage girl stayed for a weekend in the early 1940s and she simply could not believe we could turn on a tap in the bathroom and have hot water come out of it. She kept turning it off and on, almost in disbelief. I also loved seeing the enormous joy the girls displayed when Mum gave them pretty dresses to wear which she’d sewn especially for them.

I think these early childhood experiences set me up for the voluntary work I did much later in life with Father Bob Maguire, whose Catholic church and soup kitchen just happened to be in the same street, a couple of doors down, as the Presbyterian church mission Mum and Dad worked out of in South Melbourne.’


Janice: You have just had your book published on  life's mysterious nature and journeys which have taken you to many sacred  locations. Which one remains the most  significant to you today and why? 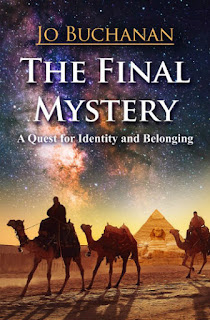 Jo: I find it difficult to single out just one journey or sacred location but the places I hold dearest to my heart are Egypt, the jungles of Mexico where I was invited by the Mayan Indians to be present at their sacred ceremonies and the incredible experiences I had with the Navaho and Hopi Indians at the Native Indian reservations in the deserts of Arizona. I love the Native American spirituality and belief system, so simple and pure. 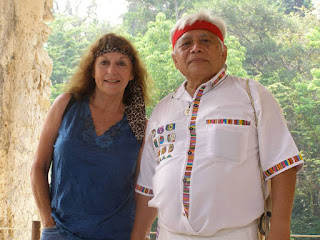 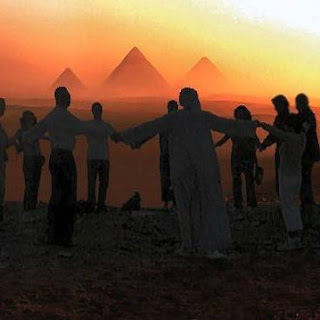 Jo's book can be purchased online via the following link:

All photos: (copyright of) Jo Buchanan.

Photo 1, Mum and I in 1963.
Photo 2, Book cover,
Photo 3, My friend Aboriginal elder Burnum Burnum, photo taken at my home in Whale beach.
Photo 4,  Mayan elder by the name of Humbatz Men.
Photo 5, .Meditating at sunrise in the Sahara desert
Photo 6. Making friends with a baby crocodile. 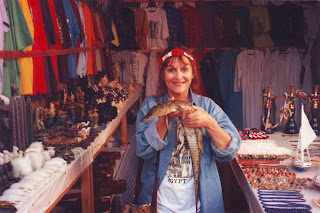