Helloe to my lovely blog readers!  The following began as a number of questions I needed to ask the wonderful Australian singer Judy Jacques.  Many articles and links and videos will be available online covering Judy's extraordinary and exquisite vocals but for now please enjoy the following and do tune into my next guest appearance on Curved Radio where I'll play the following track of Judy's along with other tasty morsels. 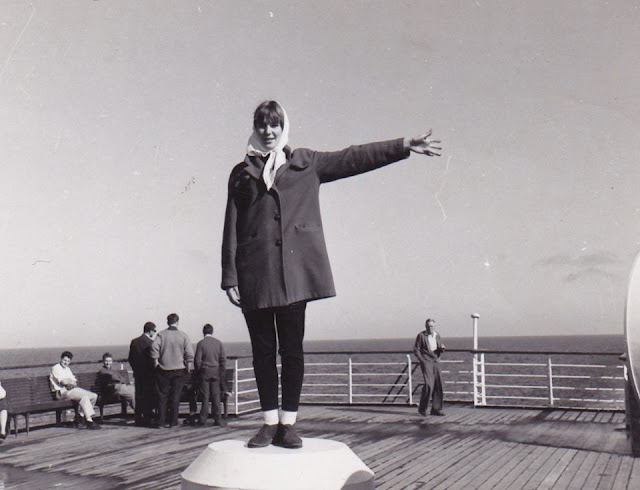 Janice
Janice:  Judy I'm going to feature your Mungo Woman track on my next CR guest spot on Nov 8th...and bookend it with an exciting female German sax player, Nicole Johanngten!
Just a couple of questions as I've accessed your bio on line but could you tell me the details of that track:

Recording details etc and why you recorded it and I presume wrote it...and with whom? 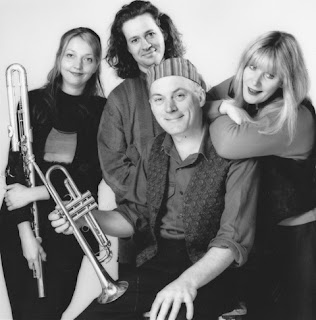 I found this pic of the lovely Lighthouse Band that went to Edinburgh, but missing Pip Event, Tuba in this…Nicola Eveleigh, James wakeling, Sandro Donati and myself…XXJ
JUDITH:  Recorded by Chris Corr and Sandro Donati, Produced by Lighthouse at Wild Dog Hill Studio, St Andrews Victoria (our ‘home' studio) April to June 1997. Judy Jacques Lighthouse, was the name of the band.


The recording combines music that I had written in 1974 (in Nth Berwick Scotland) with Lyrics by Australian Poet Eric Beach, and the then recent compositions of my own.
I wrote lyrics and music for Mungo Woman.
The record was made as we had been asked to play at the Edinburgh Festival Fringe in August 1997.

JANICE:   Also a little background you'd like to share on where you're living now and anything of significance re linking the track to place…etc.

JUDITH:  I had lived just out of the small town of St Andrews in Melbourne’s Nth East, for 47 years, then In 2011, two years after surviving the ’09 fires, Sandro and I moved to Flinders Island, Bass Strait Tasmania.

Flinders is the largest of the Furneaux group of islands. The Islands have important though tragic Aboriginal History, and rich in very early white settlement history. It is remote.

I think my approach to composition words and songs developed over the years, are deeply influenced by travels to outback areas of Australia and initially around Tibborburra NSW.

On one of those adventures, we camped at the Menindee Lakes which was dry that year.

I walked along the sandy lake bed and came to a wire fence stretched way across and into the distance…the wind was strong enough to vibrate the wire, making sounds singing like an atonal choir.

I whizzed back to the car for my tape recorder, then used sticks and whatever was around... joined in with the wind and the fence.

This eventually made a composition called ‘Menindee Wire’ which I thought worked well and was performed using the original recording, voices and images for the ‘Next Wave Festival’ and other performances...it was recorded by my Wild Dog Ensemble…through those experiments,  I was excited to continue to compose with traveling through land as inspiration…
That first month long journey showed me new territory and I felt closer to Aboriginal country, new birds, desert and songs, everything was inspiring.
On the following trip to the Tibborburra area, we detoured to stay a few days in the Mungo National Park. This was managed  by rangers from the barkindji clan who were happy to show us around. We stayed in a cabin and at night, we sat around the fire listening to their stories and watching the young folk dancing their traditional dances.
I had previously read about the burial grounds at Mungo and I was especially interested in Mungo Woman. Her remains being the oldest dated in the world. Mungo man followed.
I found it to be very Spiritual country out there. The old burial grounds are surrounded by huge wind sculpted moonscapes and white sand dunes...  Like nothing I’d seen before. So, carrying stories with me, I walked long distances through that powerful country, writing as I walked. Mungo Woman came from that journey.

JANICE: I can also talk about our meeting up at VCA (Victorian College of the Arts)...any refresher would be great too!

Funny about that... I listened for the first time a few days ago, to a taped interview made years ago for NFSA where I talked about you and I being the only singers…I think we were the only women! It was a boys own jazz biz…and we just had to make a way for ourselves, that’s what I recall…and I remember going over the top, singing a pretty wild improvisation solo with the group I had forced my way into ( from the audition, I’d been placed in a group of ‘beginners’ and was furious and insisted on working with…a group with Peter McCutcheon on piano…that just came to me)…so I had to prove myself…something like that and maybe we shared being cross about where we found ourselves and agreed to just get stuck into it…. I don’t think we learn’t much, except that then, it was a boyz own…!

JANICE: I also happened to find a great interview on Mungo man and lady on Radio National which followed on after my decision to play your track...yes...an 'as if it found me’…as it happens! 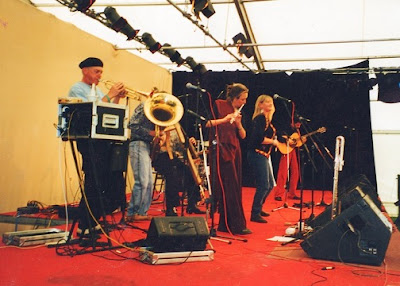