An Interview with author Alwyn Lewis

- October 18, 2011
Jan.s:  Alwyn, you write about the earth with such an immense feeling of belonging.

Alwyn: I guess I’ve always had the feeling that we belong to the earth, not the other way around.

Whenever I see those huge open cut mines I shudder at what we do to the earth for financial gain, even the weight of the cities man builds on her seem an imposition.

I remember being quite a small child in New Zealand and after an earthquake my father took me to see where the earth had opened in a great jagged scar and I wondered at that early age if the earth had cried out in pain.

Jan s:  Your book “Call of the Currawong” begins with an aboriginal woman in a seemingly benign setting – but the story quickly unfolds to reveal cruel and devastating circumstances.

Where did the seed for this story germinate?

Alwyn: In talking with some aboriginal women it occurred to me that although their circumstances and the circumstances of my grandmother’s life were vastly different, their inner strengths were so similar.

My grandmother was placed in service at age 13, but like the aboriginal women I spoke with, she made the best of her life and added to the lives of people around her, much the way Pearl does unquestioningly in Currawong.

The saddest thing for me is that this generation of women never ever realised that they were our teachers or how valuable were the lessons they gave us in humility, caring, acceptance and just getting on with it.

We now take the opportunity for tertiary education as our due, but when some of these women were born there were no choices, no chance to move out of the situation life presented to them, and for the aboriginal women no chance to move away from the impositions life handed them, in spite of which it seemed to me that somewhere deep inside they still quietly held on to something “known”.

I wanted to say something about that.  And of course something also had to be said about the devastating aspects of their lives.


From a Devonport with a very confused weather pattern.  One minute it’s pouring and windy, the next the sun is shining – ah the vagaries of Spring.
Janice, At the moment I’m writing some poetry for a tour we hope to do around Tasmania next year with Tony  Barry and me reading, George Golla, Howard Cairns and Laurie providing the musical backing 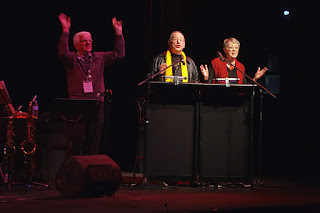