An Interview with Kate Forsyth 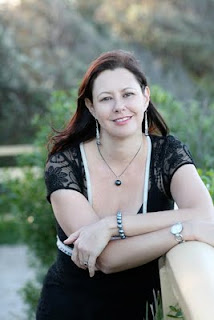 Jan:  Kate, I was walking recently with a friend and her very bright 6 year old daughter. I observed that the young girl had what I would call 'that zoned out look' in her eyes. I mentioned it to the girl, saying that I remembered going into that zone in my childhood. That it was an interesting space to enter.
Being her bright little self. she tuned in and happily responded. I had the sense of her enjoying an adult's recognition of this as being important. As we approached a crossing I then said that it was equally important to tune back in to the present moment.

In a recent interview you stated that in the early stages of writing a novel you do a lot of daydreaming.  Can you share with us what this process allows for you....

Kate: Oh, yes, I’m a big believer in the power of daydreaming. I was always getting into trouble for it as a child – I had one teacher who used to whack me over the head with a ruler and sneer, ‘are you with us, Kate?’ So it gives me great satisfaction to now be a professional daydreamer.
I can gaze out the window  as much as I like and loftily explain ‘leave me be, I’m working’. And I AM working. Although my face has a vacant expression, my mind is busy. I am thinking, wondering, imagining, planning, plotting, making connections, asking and answering questions.
My best ideas come to me while I’m daydreaming – my mind will drift away, thoughts and memories will come unbidden, floating up from the very deepest part of my subconscious, and suddenly I will see the story illuminated and made clear.
I always advise aspiring writers to clear a space in their day for daydreaming as well as writing.
For me the best times are when I’m swimming up from or swimming down into sleep, or when I walk in the morning. Walking is like meditation in motion, and never fails to inspire me.

Jan:   When I first met you at the The Sydney Children's Writers & Illustrators' Network at The Hugendon what struck me was your vibrancy and enthusiasm for literature and life! 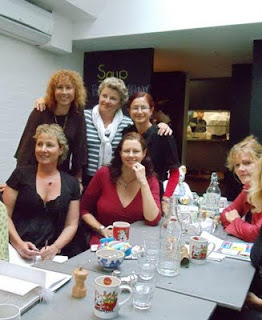 I hadn't read any of your books then...but recently I completed reading your YA novel The Puzzle Ring.  The Dedication you made to the women in your family,  the Makenzie clan, prior to the story, is evident throughout your book...you sing them into being through Hannah's spirited adventures. Would you like to tell us a little more about one of these women?


Kate: I’d love to! My grandmother and great-aunts were the most fascinating women and shaped my love of stories and history more than any another influence in my life.
I was very lucky to be born into a storytelling family.
As a little girl growing up, I was told many stories of the past, quite a few of them the old tales of the Scottish Highlands – stories of kings and queens, seals that turned into beautiful girls, giants and loch-serpents and fairies.
These stories were passed down through the generations of my family, told to my grandmother, Joy Mackenzie-Wood, by her grandmother, Ellen Mackenzie, who was born in Scotland in 1840.
My grandmother, who we called Nonnie, and her two elder sisters, Aunty Clarice and Aunty Gwen, were wonderful storytellers, and knew great reams of poetry off by heart. They were all very well-read– one of them was one of the first women to get a university education in Australia. They used to tell us stories about our family, and about the past. We were thrilled by the story of the ghost who patrols Eilean Donan castle with his head under his arm, and how Robert the Bruce was saved by a spider, and Bonnie Prince Charlie by a brave young woman called Flora Macdonald (this was a favourite tale of ours since our other grandmother, our father’s mother, was born Jean Macdonald).
I can remember Nonnie – who was my mother’s mother - telling me how Mary, Queen of Scots, escaped her enemies several times, once dressed as a boy, once disguised as a laundress. Another time, a gang of men broke into the queen's private sitting room and murdered her Italian secretary.
Poor David Rizzio was stabbed fifty-six times - one stab by each of the conspirators. His blood flowed down and stained the floor where he fell, and can still be seen, four hundred and forty years later.
Mary, Queen of Scots was taken captive but she tricked her guards and escaped the palace that night, by climbing down from the windows on a rope made of knotted bedclothes.  She was seven months pregnant with the future king of Scotland.
She rode back a week later at the head of an army, and defeated the rebels and avenged her friend. The story of the bloodstain that never fades and the queen’s escape down knotted bedclothes began my fascination with Mary, Queen of Scots.
I began to read everything I could about Scotland and its most tragic queen, and many of our family’s stories link back to her.
When I was a little girl, my mother taught me and my sister how to make marmalade from oranges we grew in our garden. She told me marmalade got its name when it was made for Mary, Queen of Scots, who was very seasick travelling from France to Scotland as a young woman (‘Marie malade’ is French for ‘Mary is ill’.) Apparently our family was even related to the royal Stuarts, though every aristocratic Scottish family can probably say the same.


Then, of course, there was the story of my grandmother’s grandmother, Ellen Mackenzie, just as romantic and tragic as any my grandmother told me.
Orphaned when only a girl, she and her sister Jane were sent to Australia in 1858 by her uncle, who took control of the family estate. My sister and I always thought this was most unfair, and used to dream about going back to Scotland and winning back Ellen’s home as our own.
In our imagination Ellen and Jane were wronged, the uncle was cruel, and her home was a beautiful old castle, on the shores of a loch, with all sorts of romantic secrets waiting to be discovered. We hoped that one day a mysterious letter would arrive, summoning us back to Scotland and our lost inheritance …
I wrote a novel with just that storyline in 1977, when I was eleven years old, called Far, Far Away, about a girl called Fiona who finds herself heir to a castle in Scotland, but will lose everything if she cannot find the lost Killarney Treasure. And then, thirty years later, I wrote it again, showing just how compelling are the tales of our childhood. 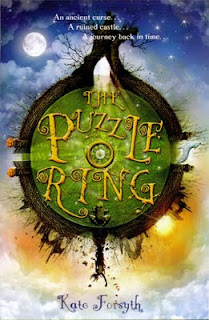 Jan.s:  In The Puzzle Ring you explore a number of themes, a curse that effects several generations...the absence of a father, blossoming love, friendship, old age and the getting of wisdom.

Would you like to share  your interest re the 'curse' and it's denouement for your protagonist Hannah?


Kate: I’ve always been interested in spells and curses and wishes as manifestations of the power of words. Many of my books have curses in them (as well as spells and wishes!) I’m also interested in the nature of fate, and whether we as individuals have the power to shape our destiny. The story of a girl who sets out to break a curse on her family was therefore always going to be interesting to me.

The two ideas just seemed to click together, as if drawn by some irresistible magnetic force. I went home and began work on the Puzzle Ring that very afternoon. (You can read more about the inspirations behind ‘The Puzzle Ring’ here:
Jan.s:  Where did your love of the  mythical begin Kate?

Kate: I always loved fairy tales and myths as a child, and fantasy books were my favourite kind of fiction. My mother went back to university and studied anthropology when I was a teenager, and that fed my interest in myth and magic. I can’t tell you why – my imagination has always been drawn to that kind of tale. 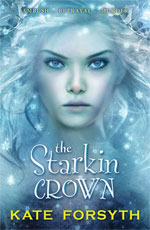