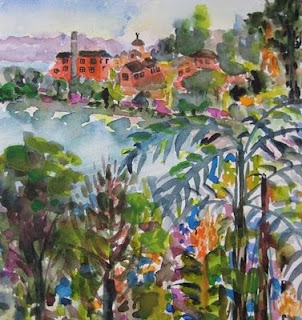 Jan.s: Bobi when did you begin painting?

Bobi: I started learning to paint beginning March 1993. I had a friend who had been going to Derek Newton who taught from his home on the North Shore, her husband was an artist and still is. So we all started from the beginning, with learning to draw, something I had never done in my life, watercolours they say its the hardest medium. I would go for a term and have a term off, So I went on an off till 1996. We started using one colour only, light to dark and I really enjoyed it. Derek of course would help us through the painting when we started, and we were all pretty neat and tidy - we learned how to mix paints from the primary 3 colours. Red/blue and yellow. We would go off to the beach and paint also quite early on. Skies, waves, beach, birds, houses, hills, landscapes in 1994 - and painted on and off during 1995/1996 Motor Racing took over our life for a few years so had time off, as I was in charge of the food, cooking for our Team, racing Touring Cars, and Tranzam Cars so painting came second for a time. We shifted from Auckland City, to our farm in Karaka in 1996 and luckily within the first few weeks, a neighbour told me of Erin McRobbie, from Pukekohe. She painted so loosely, I fell in love with her technique. I started in 1997 - a term here and there, as we were still Motor Racing in the summer around NZ. Erin had been an Art teacher. We started off with Red Mushrooms, and Daisys in the Meadows. Again Watecolours, with 6 of us in the class. I joined the Papakura Art Group, and went once a week, they had Artists come in each week, to demonstrate. I also joined the Franklin Arts Festival Committee, as Erin and her husband were on. Was on the committee for 6 years, and ran the Craft Shop - Erin used wonderful colours, in her work, and would critique after every class.
Fashion winter