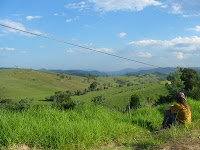 When I first met Julianne, she was living in the Megalong Valley, west of the Blue Mountains. She was composing the most haunting music on an old upright and sharing her abode with a cat called Kiku and taking care of her akido teacher's horse in the adjoining paddock. We talked about music and I asked Julianne who inspired her and she mentioned Peter Gabriel. Julianne said that if ever she wanted to be on a label it was his! Well, after a long and dedicated musical/personal journey (fifteen years I believe!) all to her credit, she's done it...a self funded, self penned and exquisite work of art from Julianne.

Julianne, not unlike the indigenous people of this land (Australia) has a deep love of country. The above photo was taken of Julianne returning to one of her beloved places in the Megalong Valley on her most recent holiday.
music