- January 06, 2021
I've been thinking of learning a new language Something different for the new year . It's never too late to learn Or change , To rewire the neural networks Inside my tired aged brain. I thought I might start with Blackbird Or Crow Perhaps the busy speech Of the honeyeater or silvereye But I'd have to be quite quick. I can pick out a few words Here and there From the river's urgent rush Hidden in the valley's green Replete from the rains wash. A bowerbird spoke to me In the shortened form Of glances and wing's Brushing the morning air But I missed the meaning Before I could ask her to explain. Some cicadas became vocal When the dappled sunlight emerged And shone on the eucalyptus High above. Then stopped again at the sound Of the breeze's whispered breath. And the peeled back bark Of the mountain ash Revealed some secret script Against the naked shiny trunk, Obscure and incomplete. I have little time To waste however With the angry mosquito's buzz As they emerge from the shadowed darkness Singing greed and bloodlust. There's a much more ancient language Of which I've hardly been aware Like the ground beneath my dirty Wet blackened boots Or the life giving Precious air. The kookaburra made his usual fuss At the very thought of such an idea But this ancient language Has been around Long before he or me Intelligent and aware The frame upon which all life Relies, Hidden , occult, weird And foreign Woven networks silent To the bright outer sky Sprouts appear on the dying forest Sinuous and net like The womb upon which greater things Rely Obscured from sight. Fungal world Mycelium's garden Where insects and plants emerge Like the wondrous puzzle Of the human brain So is this Mother tongue to our world. John Davies Jan 6,2021 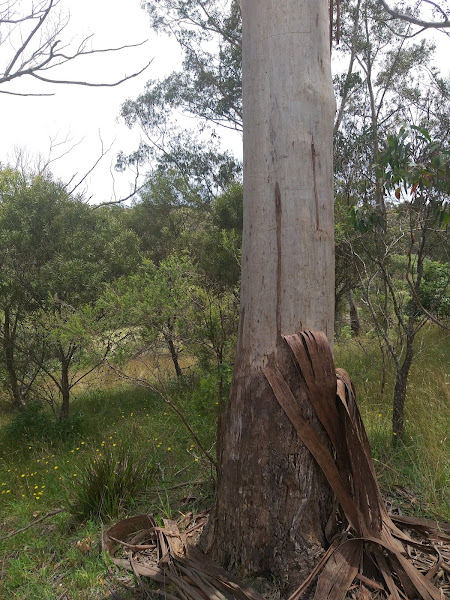