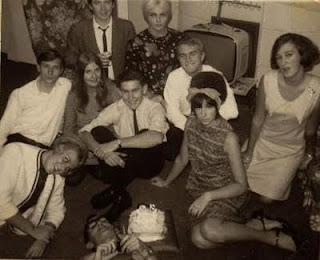 Jan.s: Bobi...we're back in contact again after many many years and it's wonderful.

We first met in the 1960's when you were in Sydney working for Dinah Lee. You and Dinah were the hippest gals on the scene!

You emanated style and street smart...at the same time I found you always inclusive - both of you were, and with great smiles! I'd love you to share with us about what brought you to Australia and also about working with Dinah....

Bobi: Firstly, my sister Denise Austin lived in Sydney and was one of June Dally Watkins top models. She heard about a job coming up as a Store Model for Farmers Department Store on corner of George/Pitt Streets. Carol, the model who was leaving, was off to open Sportsgirl in Melbourne in 1964 - So having a job to go to, I flew back to Sydney, and flatted in Double Bay with another Kiwi, Jenny Steele, who was the Fashion Compere there. Fashion Co-ordination employed five girls including Judy who married Ken Done, the Sydney artist.

We modelled daily, five parades every day. All the department stores employed their own House Models in those days. I joined in Jan 1965 - closed in July. During that time, Dinah was flying to Australia for The Johnny O'Keefe Show, Saturday Date, (and maybe Bandstand?) I met Dinah (Diane Jacobs) in Auckland at The Casual Shop early on in 1964, then on one Friday night in Queen Street Auckland, she yelled across the road, "Bobi, I have a new name -- pulled out of a hat. Dinah Lee".

When Dinah came to Sydney for TV she would usually pop into Farmers when I was modelling for a catch-up. Often for special parades we used Sydney DJ Tony Murphy (Murf the Surf) as compere. As well as Jenny Steele there was always quite an audience watching the parades. I had my Mod look, completely different from the other models.

Billy Thorpe would also pop in to say hi and watch as well. Dinah's records were shooting up the chart's and her Manager, Jim Haddleton decided to move family and Dinah to Sydney towards the end of 1965. She also moved into the same block of flats in Victoria Street, Potts Point.

At that stage I was flatting with Jacky Holme a full time model with June Dally Watkins. After Fashion Coordination closed its door at Farmers, I was offered another job working for one of the buyer's as I was a shorthand/typist, but turned it down. I was offered the job Managing the new NZ Boutique "The Casual Shop", which was opening on King Street, Sydney beside the Tivoli Theatre exit selling one off dresses usually like Quant, and UK designers.

We opened with a big Fashion Parade at Nat Kipner's Dance club in Pitt Street. Max Merritt and the Meteors backed it. The clothes were made in NZ, and in '65 exported to Sydney. The shop was very successful, and would sell out quickly, while we waited for new stock to arrive. I stayed at the Casual Shop for 5 months. They had dressed Dinah in NZ as it was a very up to the minute Boutique. All Dinah's stage and day clothes came from there at the time.

When Dinah arrived to live, before I left the Casual shop I would usually go out on jobs with her as company. She was doing the Millers Hotel Circuit, Leagues and RSL Clubs, The Motor Club in Sydney at that time, plus TV, Radio etc.

By Christmas '65 Dinah's Manager Jim Haddleton, put it to me, that as Dinah was booked a year in advance that he felt she needed someone to travel with her as Road Manager, Secretary/ PA.

He was married with a young family and didn't have the time - I handed in my notice, and replaced myself at the Casual Shop and I moved into her flat. By early January '66, we were both in Melbourne for promoters Eddie and Pedro. it was such a different scene to Sydney's Club Scene. Dances, Restaurants, the odd Hotel, TV - but it was very busy and exciting, more English than Sydney, with lots of groups, and niteclubs like Berties, Sebastian's, Thumping Tum, just some of where the 'Beautiful People' congregated.

That first trip to Melbourne, Tom Jones and Herman's Hermits were appearing there, and we had met them the week before at The Chevron Hilton, Sydney. EMI, Di's Record Company would invite us to their Media do's, therefore we met a lot of their visiting International Stars. We travelled by taxi daily to every job for at least a year or more, before she bought her first Mini in '66.

Jan.s: Bobi...I can tell there are some more stories here about that Mini...I want to know more...!! Your life and stories are fantastic...I can't wait for the next interview!!

Maggie Britton said…
Gosh I loved reading this interview with Bobi ....so many memories .........it ends before we met so please interview her again. I remember Bobi's sister .....very beautiful well known model .....and Dinah still amazing after all these years.
More please.
December 20, 2011 at 3:17 AM