- June 06, 2011
Some years back, whilst confronting a major illness, I was introduced to Tibetan Buddhism, through a fortuitous & timely introduction to my teacher (the late) Gyalsey Tulku Rinpoche (Sakya lineage). I remain in gratitude. 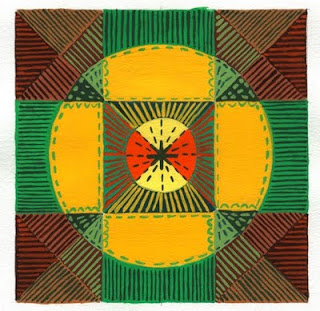 In the lovely  harbour side suburb of Balmain, Rinpoche would give teachings on Chenrezig practise. Chenrezig is the Buddha of Compassion.

I have to admit that I found the practise challenging, beautiful and obscure and a lot of other gradations in between! I was suffering the effects of illness and my stamina was almost non existent and we would recite the practise several times in Tibetan, finally completing it in English!  Although I was eager to traverse the nuances of a language that was completely foreign to me, the practises were lengthy and tiring.  Along with this the framework of the practise was outside anything I'd encountered. Here I was, ill with an uncertain  future, being asked to develop a compassion that reached far beyond my own concerns along with developing ...'the perfection of body, voice and  mind'.  This seemed an impossibility along with an improbability!

Since those days  I have  received the Chenrezig empowerment a number of times. Now I understand that this is a life long practise. I can make no claims to comprehending and experiencing the many subtleties of this practise but I have experienced a sense of peace and well being.

My intention in developing the mantras for 'Awakened State' with my friend Bruno,  was to give thanks and gratitude foremost to my teacher Gyalsey Tulku Rinpoche and to the many great and kind teachers who followed.  Also to share with those who helped me through such difficult times.

I am indebted also to Bruno Elevteros Libert for his artistry, musical intelligence and guidance and to his  partner, Diane Sutherland for her superb vocals as well as developing wonderful mandala drawings for our project.  John Paul Gilius joined me in chanting a number of the mantras. Although he was unfamiliar with them at the time, he sang them with great good will and enthusiasm.  Thank you JP!

'Janice and I got back in touch a couple of years ago, after having worked together in Esperanto Rock Orchestra...30 years ago. We started this Mantra "cyberspace" project via the internet between Australia and Belgium when Janice sent me her vocals/sound files by e-mail! I then put together and recorded the backing tracks in Brussels and Patmos. And here are the results of our collaboration. All "nature" sounds (some have been processed) like rain, wind, sea, birds songs etc..I used in the tracks were recorded in Patmos'.  Bruno Elevteros Libert. 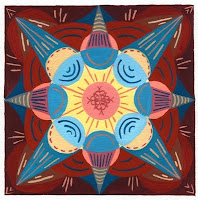 The collection is called: AWAKENED STATE:  Chenrezig:  The Buddha of Compassion

The mantra of Chenrezig is:
Om Mani Padme Hum.

Homage to the Lotus Born 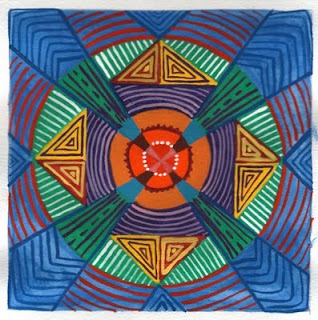 All of the wonderful mandala drawings developed for 'Awakened State': courtesy of & copyright of Diane Sutherland 2011 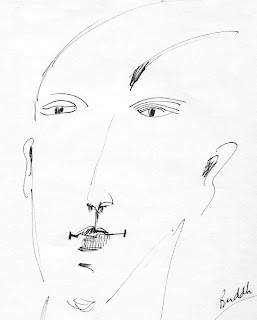 You might like to visit his website on the  link provided below and hear some of the mantras we co created along with the superb English soprano, Diane Sutherland, and quirky guest vocalist, Blue Mountains DJ and resident  John Paul Gillius. 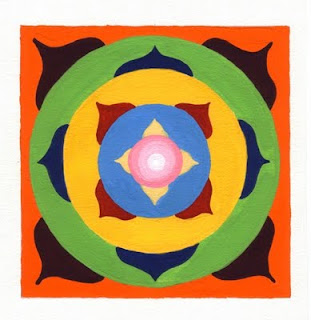