An Interview with Bill Barnes 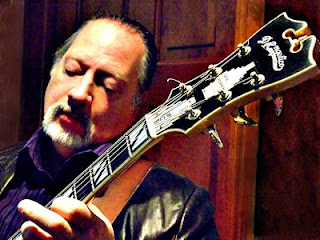 Jan.s: Bill, I believe you grew up in the South...? Were they any direct musical influences from growing up there?

Bill: At first, growing up in North Carolina may have been an impediment- as a kid from Pittsburgh, I had some hard times growing up in a community that was still sore over the civil war. I might add that, even though Monk and Coltrane were Carolina-born, they both escaped. There are certain earthy, folksy attributes unique to the south that left a mark on my playing.

Back in the 1950s, radio and TV ran a lot of local artists, mostly in the country or R&B genres, and that had to have rubbed off. Still, there wasn’t much jazz in my life until I was well into my teens. My first jazz guitar influence was Kenny Burrell- prior to him, it was all rock ‘n roll, R & B, the Barkays and, of course, Stax session guitarist Steve Cropper.

Jan.s: By the late sixties you were working with musicians who were driving more than half the teenager population into reckless hedonism! ...You were playing with them! : (to quote) '... R & B artists like, Eddy Floyd, Spider Turner, Dobie Gray, Rufus Thomas as well as pop artists Gary US Bonds, Dion and others'.

Bill: Well, during the late sixties, when I was still in high school, I had started an R&B group with some college boys from NC State and Carolina and learned a little about working with horns. Back then R&B recording artists who were either on their way up or past their prime would use “pick-up bands,” mostly white soul bands from the South, who would work for cheap just to be onstage with some of these luminaries.

We had an old Greyhound bus which would break down in some uncomfortable places- like south Georgia, where we were actually run out of one town at gunpoint when our bus’s alternator failed. That was when we toured with Arthur Conley, an Atco Records star who had the hits “Sweet Soul Music’ and “Funky Street.”

This was about a year after Otis Redding died. I had the rare privilege of playing a concert at Tuskegee Institute- in 1968!

Jan.s: Tell us about one such musician/band that had an effect at the time on your playing...?

Bill: My horn band, The Variations, which backed up Arthur, Eddie Floyd and so many others, was the gig which helped me get into jazz. On the road we would listen to Blood, Sweat and Tears, the Flock and Dreams and tried to emulate that sound.

When we first worked with Arthur, he had his own guitarist, a Macon, Georgia session player named Carl Williams. At first I only played the warmup and dance sets, but took over the job of conducting and playing Arthur’s set when Carl left to play with Clarence Carter, who offered him more bread.

Carl was an extremely lyrical and rhythmic player- he could make his Gibson 335 semi-hollow body scream and cry! I stole most of his ideas and tricks. He used to talk about this one session cat at Capricorn Studio who played with a bottleneck- I think it was Duane Allman, but I never got a chance to meet him until years later.

The guy who helped me make the transition into jazz was a guitarist from LA named Clif Kuplan. I was 19 when I met him at a friend’s house in Raleigh- we were jamming and he just blew my doors off. From that time until I left North Carolina, I picked his brains shamelessly- it was probably irritating for a 27 year old to have this pimply-faced teenager always showing up at his door, but, well, there it is. Through Clif, I was turned onto Pat Martino, Larry Coryell, Mclaughlin, Bucky, Wes, the whole constellation of jazz guitarists. I had to learn how to play, all over again.

Jan.s: Bill, you have had amazing journey, thanks so much for sharing this part of it with us...I look forward to hearing more...!

Bill's latest release: November 2011 can be heard online and purchased via Ponca Jazz, link as below: